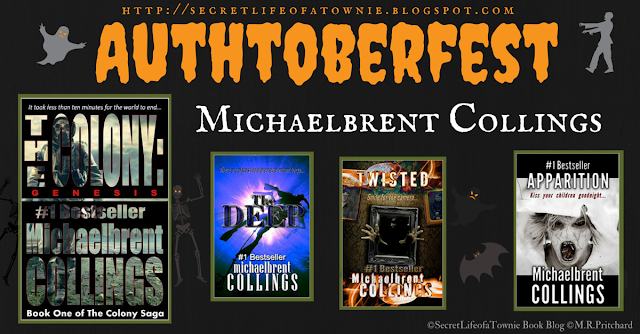 1. It’s the zombie apocalypse and writers have got to stick together to survive. Pick 3 authors to be on your zombie apocalypse killing team and tell us why you’d choose them.
Stephen King, Larry Correia, George R.R. Martin.
Stephen King – come ON. The dude probably knows more about apocalyptic stuff than anyone else alive. I'm sure he'd be a valuable resource.
Larry Correia – Larry's the bestselling author of the Monster Hunter International series, which gives him automatic cred in all things monsters. Plus: he's HUGE. And always armed. Most authors are (less face it) less than imposing physically. This dude is bigger than Conan.
George R. R. Martin – not to put too fine a point on it, but I think I could outrun him. Always a good idea not to be the slowest guy on the team.

2. If Stephen King and J. K. Rowling were drowning in a river, who would you save first? And now you have to tell us why.
Michaelbrent says: J.K. Rowling. They are both huge contributors to popular culture, and I hear they're really nice. But Rowling is younger, and has younger kids. Also, she's a woman – and I know it may be sexist, but I was raised in a "women and children first" kind of home.
Plus, there's a greater chance that King is a witch. So he'd survive.

3. We authors are voracious readers. My TBR list is approximately 8 miles long. What are you currently reading?
Michaelbrent says: I'm currently reading 14 by Peter Clines, Abigail and John: Portrait of a Marriage by Edith Gelles, Swan Song by Robert McCammon, His Majesty's Dragon by Naomi Novik, and Sammy the Shark by Bobby Bishop. The last one is what I read with my toddler, so don't judge. The others sit happily atop various toilet tanks in my house, since I have four kids and pretty much everything but bathroom time has turned into a team sport. In fact, I don't even call it a bathroom anymore. I call it "my tiny tiny office with a fairly comfy chair and a lock."

4. What is the one book that you could read a million times and never get bored with?
Michaelbrent says: Crap. Really? Crap. Uhhh… Ender's Game springs to mind. I read it as a kid and have returned to it a dozen or so times over the years. A million reads might be a bit much, but it's got at least a few more reads in it.

5. Last year my favorite read was The Martian by Andy Weir. What was your best read of 2014?
Michaelbrent says: Gah! Really? I can't do things like that. My favorite book is always any good book I'm reading now. Books are there to fit my mood and fit my life, and any time they do that, they are a treasure. Plus, if I'm being honest, I can't remember as far back as 2014. I'm a writer, which is French for "generally incompetent," so asking me to remember anything farther back than when I put my shoes on this morning (on the wrong feet) is pretty much a lost cause.
Though I do remember I read Sammy the Shark. A lot.

6. This year my favorite read has been The Dog Stars by Peter Heller. What’s the best book you’ve read so far in 2015?

7. You’re a writer by day and a superhero by night. (Take off those geeky glasses Superman) What’s your superpower?
Michaelbrent says: My superpower is to let others see themselves the way I do. I think one of the saddest things about human nature is that we so often seem determined to see ourselves in the worst possible light, then attempt to live down to that expectation. But people are mostly awesome, and the better they know that, the better they tend to treat those around them.
8. I have writing spots all over my house: my desk, my couch, the patio, and my bed. Where’s your favorite spot to write?
Michaelbrent says: Honestly? Anyplace with wifi and a refillable soft drink. I work at restaurants, book stores, coffee shops. I tend to stay out of my house because I don't want to disrupt my wife's life too much – she's too good a woman to have me inflicted on her 24/7.

9.  We’re supposed to love all of our children equally, but there are some scenes I’ve written that really stick out in my mind. Tell us your favorite scene from your book.
Michaelbrent says: I think my favorite scene would probably be in my book This Darkness Light. It's an apocalyptic thriller where a hitman is told to kill a good person who may be holding a Doomsday virus. The hitman is a good person (he's a hitman with a heart of gold, and a priest to boot), and he starts to have reservations so a psychotic killer is sent with him to make sure he stays on target. During one scene the psycho threatens the hitman's loved ones, making it graphically clear he'd love to kill them – and worse. Then he starts singing showtunes and songs from Disney's Aladdin. Because psycho. Love that scene – chilling, thrilling, and strangely funny all in one.

10. Sometimes a little too much of myself slips into my characters. Which one of your characters most resembles you?
Michaelbrent says: Ken Strickland. He's the main character in The Colony Saga – a zombie apocalypse story with the most amped-up zombies you've ever seen – they're fast, they're evolving and learning as they go, and headshots just piss them off. Ken is an average guy who finds himself a survivor in the aftermath and just wants to stay one step ahead of the things that threaten him and his family. I'm not a teacher, but like Ken I'm just a normal guy – no superhuman powers that would give me an edge – I love my family and worry about them, and I think people are mostly good and would help each other in an Apocalypse. Also like Ken, I do karate. Kee-yah!

11. I’ve always got tunes rocking while I’m writing. Tell us five songs that are on your playlist.
Michaelbrent says:
Friday Night by Lilly Allen
Ants Marching by Dave Matthews Band
Walking on Air by Kerli
Find My Baby by Moby
Funhouse by Pink

12. If you could tell an aspiring author one tiny tidbit of information, what would you say?
Michaelbrent says: Wow – I assume by "aspiring writer" you mean "someone who'd like to do this for a living." To those people I say: it's a JOB. Don't go thinking you're going to puke up a masterwork on the first try, and that some agent will scoop it up in his/her magic barf bag and turn it into money. The average time for an author to "make it" ranges somewhere between five and sixteen thousand years. It's hard work, a second (or third) job for a long time before you make it. And even then, once you've made it you have to work your butt off doing marketing, PR appearances, and – oh, yeah – always writing your next book. Don't get me wrong, it's a cool job, and the best one I've ever had… but it's hard. Only those who give it their all – and then some – are going to stick around.

Michaelbrent Collings is one of the top indie horror writers in the US, one of Amazon's Most Popular Horror Writers (for three years and counting!), and an international bestseller in 40+ countries. He is also a produced screenwriter who works in Hollyweird, though he has never "done lunch" or engaged the services of a waxer.

His bestsellers include The Colony Saga, Strangers, Darkbound, Apparition, The Haunted, The Loon, and the YA fantasy series The Billy Saga.

He hopes someday to develop superpowers, and maybe get a cool robot arm.

Michaelbrent has a wife and several kids, all of whom are much better looking than he is (though he admits that's a low bar to set), and much MUCH cooler than he is (also a low bar).

He also has a Facebook page at http://www.facebook.com/MichaelbrentCollings and can be followed on Twitter through his username @mbcollings.

Sign up at http://eepurl.com/VHuvX for advance notice of MbC's new releases, sales, and freebies. You will also be kept safe when the Glorious Revolution begins! MWA-hahahahaha!