The Future Chronicles - A review

I'm not one for short stories. I like to lose myself for hours - or days - on end, get really deep in the drama for 200 pages or more. Last week that changed.
Last week I read The Future Chronicles.
This group of authors serve up a variety of futuristic stories that will  get the gears of your brain turning. The forward by Hugh Howey brought me back to the tiny goat farm I grew up on and Peter Cawdron's #DontTell stole the crown. Samuel Peralta's Humanity was a close runner-up. Overall, a must read for fellow sci-fi lovers. 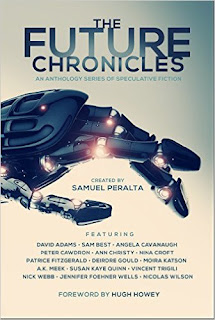 Get your copy of The Future Chronicles

The Future Chronicles - Special Edition includes fifteen stories, selected and new, from some of today's best writers in speculative fiction.

It includes ten selected stories from some of the Chronicles' popular titles - Robot, Telepath, Alien, and A.I. - to give new readers a taste of the series; and includes five completely new stories, first published in this Special Edition.

The Future Chronicles has grown, from a single collection of robot stories, into a series whose unique take on major science fiction and fantasy themes - A.I., aliens, time travel, dragons, telepaths, zombies, immortality, galactic battles, cyborgs, doomsday - has made it one of the most acclaimed short story anthology series of the digital era.
Posted by M. R. Pritchard at 4:14 PM 1 comment:

The Girl With all the Gifts by M R Carey 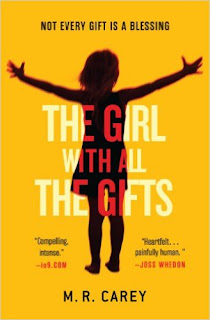 NOT EVERY GIFT IS A BLESSING.


Melanie is a very special girl. Dr Caldwell calls her "our little genius."


Every morning, Melanie waits in her cell to be collected for class. When they come for her, Sergeant keeps his gun pointing at her while two of his people strap her into the wheelchair. She thinks they don't like her. She jokes that she won't bite, but they don't laugh.


The Girl With All the Gifts is a groundbreaking thriller, emotionally charged and gripping from beginning to end.

There's a moral code I live by when it comes to buying books: If you want to read it, it will eventually go on sale. I got this sucker for $1.99!

I've had TGWATG on my TBR list for most of the year, and the hum around this book made it even more enticing to read. When one of my bookish friends told me how amazing it was, I had to get my hands on The Girl With All the Gifts. I wasn't expecting a zombie apocalypse setting, with the title of this book I was expecting more of a superhero vibe. But, this was a pleasant surprise. The first half of this book was definitely intriguing. Eventually it turned into the typical run-for-your-life-the-zombies-are-coming apocalyptic novel. But the zombie origins storyline made this unique and wonderful. I really loved the underlying story of a motherless girl and her beloved teacher. Our main character, Melanie is super smart, a lover of greek mythology, and intuitive when it comes to figuring out what she really is. There were more great storylines, the mad scientist wanting to cut children's brains apart, and the stone faced soldier trying to hold shit together. Overall, this was a great read. The ending was a bit gloomy, but what do you expect with the zombie apocalypse?

What comes with every great book... a movie.

M.R. Carey will adapt his 2014 novel The Girl with All the Gifts for film, The Hollywood Reporterannounced today. Retitled as She Who Brings Gifts, the movie will star Glenn Close, Gemma Arterton, and Paddy Considine, and will be directed by Colm McCarthy (Sherlock, Doctor Who).
These stars will likely play the three central adult roles in the film: We’re assuming Arterton is idealistic young teacher Miss Justineau, who must teach special children in the wake of a worldwide fungal infection; Considine will bring the muscle as Sergeant Ed Parks, terrified and disgusted by his charges; and Close must be Doctor Caroline Caldwell, who will sacrifice as many test subjects as she needs to in order to find a cure.
But what about Melanie, the girl who will bring gifts? The casting directors will probably be looking for an unknown to play the precocious Melanie, who knows that something is wrong with her but also yearns for love and acceptance. In a press release, producer Angus Lamont talked a little bit about the film’s emotional core:

Melanie’s story is a completely unique take on a much loved genre, seamlessly blending together a lonely child’s search for love and family with a terrifying journey where she controls the fate of the last adult humans on earth.

Filming will begin in the UK in May 2015; no release date has been announced yet.