Please welcome Jim Morris author of WHAT LIES WITHIN! 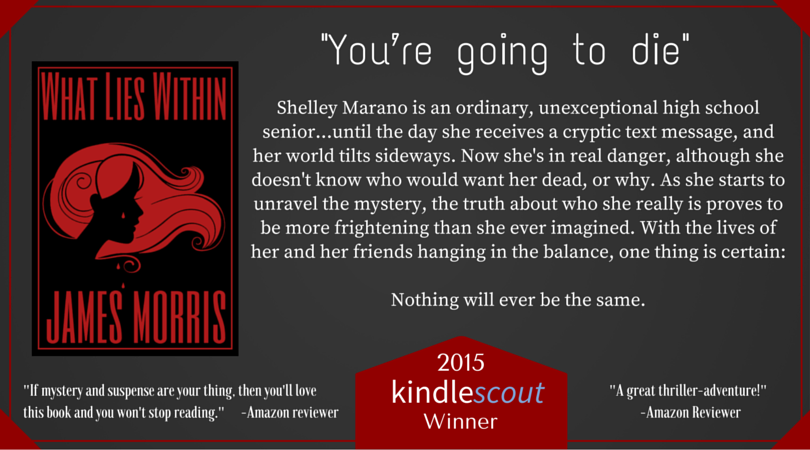 I was lucky enough to "sit down" with Jim and ask him a few bookish questions before his novel releases on June 2nd.  Let's see what Jim had to say about Zombies, reading, and writing.

1. It’s the zombie apocalypse and writers have got to stick together to survive. Pick 3 authors to be on your zombie apocalypse killing team and tell us why you’d choose them.
Jim says: Norman Mailer, not because I knew him or have read his stuff (yet), but he was apparently temperamental, and seems like he would go crazy on some zombies; Ernest Hemingway, because I did read a ton of his books in my 20s, and given that he liked to hunt, he would know his way around dispatching the undead; and Stephen King, ‘cause with his imagination, we’d come up with some great strategies to survive.

2. If Stephen King and J. K. Rowling were drowning in a river, who would you save first? And now you have to tell us why.
Jim says: Probably whoever was closest. They have both impacted our culture, and both deserve a shot at making it out of the water!

3. We authors are voracious readers. My TBR list is approximately 8 miles long. What are you currently reading?
Jim says: I’m reading The Forever War by Joe Haldeman. It was recently optioned for a film, and I like to be up on what’s happening in the book-to-film world so that I don’t end up working on a novel for months at a time, only to finish it and find out, “Oh, so-and-so is starring in a movie just like yours!”

4. What is the one book that you could read a million times and never get bored with?
Jim says: I usually don’t read books twice because there are just too many books waiting! But I’ve loved Ray Bradbury since I was a kid.

Meredith says: You're killing me, Jim.

6. This year my favorite read has been The Dog Stars by Peter Heller. What’s the best book you’ve read so far in 2015?
Jim says: My Amazon wishlist is filled with books, so I don’t often read books in the year they are released because I’m still catching up on things. I will say two books in my memory that I loved were The Night Circus and Beautiful Ruins.
Meredith says: I loved THE NIGHT CIRCUS! (PS if you loved THE NIGHT CIRCUS and HARRY POTTER then you have to read THE PAPER MAGICIAN)

7. You’re a writer by day and a superhero by night. (Take off those geeky glasses Superman) What’s your superpower?
Jim says: You know, I’d want wishes from a genie, ‘cause I think we all just need some help every once in a while getting over the bumps in life. Having a superpower would make one particular thing too easy, and I think over time, it might make me feel too separate from my fellow man.

8. I have writing spots all over my house: my desk, my couch, the patio, and my bed. Where’s your favorite spot to write?
Jim says: My desk. It’s my office, and it’s got things the way I like them. But when I’ve got a bit of writers’ block, I find mixing up the spots helps, as well as moving from the computer to writing by hand. Something about the shift works different parts of the brain. That’s my theory, and I’m sticking with it!
Meredith says: If it ain't broken, don't fix it.

9. We’re supposed to love all of our children equally, but there are some scenes I’ve written that really stick out in my mind. Tell us your favorite scene from your book What Lies Within?
Jim says: I have read my draft over a thousand times, so it’s weird, any affection I had for some scenes got reduced because I saw how much other scenes needed my attention. A writer told me about screenplays that the script is only as good as your worst scene. So I try to find the ones that need the most TLC. But I’ve always enjoyed my first chapter because well, it’s what I wrote first, and I like to think I did a pretty good job of hooking the reader.

10. Sometimes a little too much of myself slip into my characters. Which one of your characters most resembles you?
Jim says: In What Lies Within, that’s probably Winston. He’s Shelley’s best male friend, and he’s got a bad case of being in the Friend Zone, even though he’s funny and sensitive. Alas, that was my high school experience. (Shudder).

11. I’ve always got tunes rocking while I’m writing. Tell us five songs that are on your playlist.
Jim says: I can only listen to music that doesn’t have lyrics – the lyrics are too distracting. So it’s a mix of orchestral, electronic or upbeat Tango. I do, however, love music, so when I’m not writing, my iTunes is going all the time.
Meredith says: There's nothing quite like a good orchestra compilation. I used to play cello. Have you ever listened to 2Cellos? They're amazing. I wrote many scenes from my book SARATOGA to their album.

12. If you could tell an aspiring author one tiny tidbit of information, what would you say?
Jim says: I’ve said this before, but “quit.” If you can quit, then writing was never for you, anyway. It’s harsh, but I say learn now what you love or don’t love, because this road is 99% rejection followed by an avalanche of heartache.
Meredith says: Excellent advice

(That looks like a Corgi. Corgis rule)
*Correction: It's a Cattle Dog - Cattle Dogs still rule :) *